New to Studio 22? Get Your First Class Free!* *Deal available online only. Good for your first-ever visit.

Get To Know Your Instructors:
Aimee Mendez 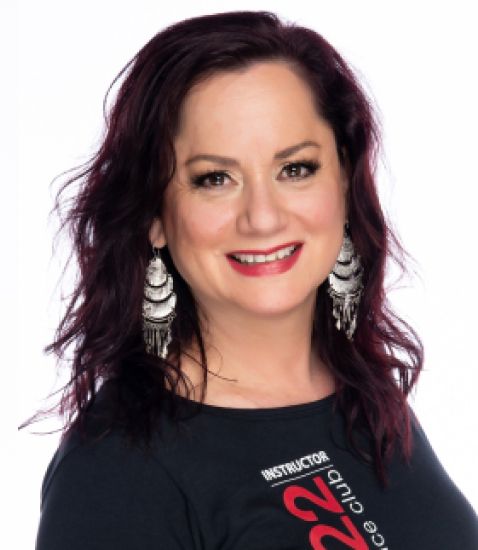 Aimée Mendez has been a full-time partner dance teacher, competitor, and performer for over 20 years. She started her competitive career in the Professional American Rhythm category, competing in Texas, and throughout the United States.

Her subsequent focus on Pro-Am competition has been met with much success: She was the teacher of DanceSport's 2002 Top Male Bronze Student of the Year and the 2005 Top Male Newcomer at the prestigious Ohio Star Ball, televised as America's Ballroom Challenge, among other accolades.

In 2009, Aimée coached Jake Pavelka of ABC’s The Bachelor prior to filming the show. His interest in dancing was recognized, and he was invited to compete the highly coveted Dancing with the Stars show, one of the most popular dance shows in recent history. Aimée enjoyed a front row seat at the show during Season 10 when Jake invited her as his special guest.

Aimée teaches beginning to advanced students of any age, and takes a particular interest in sharing her love of dance with couples that want to add a spark to their marriage by including the hobby of partnership dancing, either socially or competitively. In December 2011 Aimée helped a couple realize a bucket list dream of traveling to Vienna, Austria and attending The Imperial Ball; she has a great passion for helping a couple connect through dancing and making dance dreams come true!

As an Instructor at Studio 22, Aimée specializes in working with wedding couples, helping them to feel comfortable and prepared for their first dances. She also teaches private lesson students and group classes in a variety of styles, including American Rhythm & Smooth, Country Western, Club Latin, and many more!

Get To Know Aimee in 22 Questions

What inspired you to become a dancer?

I watched Championship Ballroom Dancing on T.V. with my mother. I said to her "I can do that!" She said "You think you can dance like that, you should be a Ballroom Dancer!!" I said "Oh Mom, that's so silly!" (Moral - always listen to your mother!)

What is your favorite thing about teaching?

I specialize in teaching couples and I always am so happy to see a couple engage at a deeper level exponentially while they dance. I get to be there when they look at each other so lovingly in a special way!

Do you have a mantra you live by or a favorite motto?

A quote by Martin Luther King Jr really resonates with me: "Life's most persistent and urgent question is, 'What are you doing for others?'"

Who is the most inspiring person you know?

My mother was one of the most intelligent people I have ever met but recently I met the first mother in space, Anna Lee Fisher, and I'm so excited and blown away by the wonderful women in this world that have paved the way for women today.

If you could travel anywhere in the world, where would you go and why?

I would literally travel the WHOLE world. Cunard Line has many world cruises and I've already researched them. It's only a matter of time, and I'll sail away :)!

What is your favorite thing to do on your day off?

What is your favorite T.V. show to binge watch?

What are two things not many people know about you?

I have freakishly exceptional hearing. And I like to pretend that I don't have good hearing.

Where did you grow up?

What is your secret talent?

What is your guilty pleasure?

What is your weirdest habit?

What celebrity embodies your inner rockstar?

Daenerys Targaryen (I know she's not really a celebrity but she is a Warrior Princess like me!)

What is your go-to sing-in-the-shower song?

"Cruisin'" Smokey Robinson or "One Fine Thing" Dede Bridgewater, Irvin Mayfield and The New Orleans Jazz Orchestra /"One Fine Thing " was the song that was played when I walked down the aisle at our wedding.

What is your favorite food/restaurant?

What's on your bedside table?

Depends on the time of day or night :).

What did you want to be when you grew up?

One word people use to describe you?

What never fails to get you out of a bad mood?

What are the top three things on your bucket list?

What is the best advice you ever received?

If you think you have a problem, decide if it's a small or big problem. An example of a big problem is someone is shooting at you. Only worry about the big problems.

“Aimee Mendez is a complete professional. She knows all the types of ballroom dancing, and has the patience and experience to pass her knowledge to students of all levels. If a couple wishes to learn together, or a if a single student wishes to learn by himself, she can lead them on an experience of a lifetime.

She also has knowledge on how to apply dancing. Whether the student wants to dance socially, do that special dance at a wedding, perform in a show, or compete, she can guide her students to whatever their goals are”